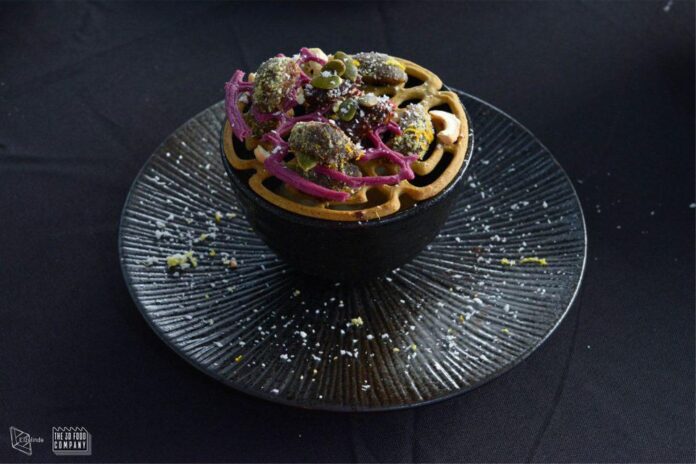 According to the FAO, every year, roughly one-third of all the food produced for human consumption gets lost or wasted. That’s about 1.3 billion tonnes. Unsurprisingly, fruits and vegetables have the highest wastage rates of any food.

But what if we could find ways to magically turn food waste back into perfectly edible food? This is what Elzelinde Van Doleweerd and Vita Broeken, two Dutch girls in their twenties, are trying to do with their brand new company Upprinting Food.

It all started during Elzelinde’s final bachelor’s year at the University of Eindhoven when she had the idea of utilizing 3D printing technology to upcycle food waste into edible products. She decided to focus on bread because it’s the number one wasted food product in the Netherlands.

To create a printable food paste, Elzelinde mashed the old bread and added spices and herbs to make it more flavorful. Afterward, she filled a syringe with the paste and injected it in the printer. Finally, she baked and dehydrated the printed food, to make it last longer. The final product was a crunchy, yummy snack.

Aside from the fact that to me this still sounds like magic, it also sounds like an intriguing way to rethink food waste. Many people agreed and the project was presented at the Dutch Design Week 2018 last October, where it was warmly received.

Encouraged by such a positive feedback, Elzelinde decided to bring her upcycling idea to the next level and partnered up with Vita Broeken to found the company Upprinting Food. Together, they worked hard to expand the number of wasted ingredients they can work with (which now includes fruits and vegetables) and to create additional recipes for new food pastes. At the moment, their aim is to help restaurants to analyze and reuse their food waste.

As is often the case with these nifty innovations, scaling them is the main obstacle and Elzelinde and Vita’s product is no exception. However, despite their young age, the two entrepreneurs are not shying away from this challenge and are studying possible ways to overcome the issue.

In all this, a few days ago, they were awarded the ECO Coin Award 2018 – a prize promoted by Dutch organization Next Nature Network to honor “outstanding ecological heroes” – for their “strong and innovative concept that could truly change the world for the better.” Not bad at all for an idea that started off as a simple university project.

This intervention offer’s a new twist on the term “up-cycling.” Normally, food waste may be used as compost, or donated, however this intervention is unique in that it combines the application of 3D printing with an unsuspecting raw material. The product that results is an intricate chip/cracker like substance. This innovation, offers an interesting divergence from the norm that calls for further exploration. However, one must question the nutritional value of the food produced. In many food preservation techniques, nutrients can be lost due to the nature of the preservation method. The same could possibly be said for this intervention and poses the question of how might we reduce food waste and preserve food while retaining nutrient density.