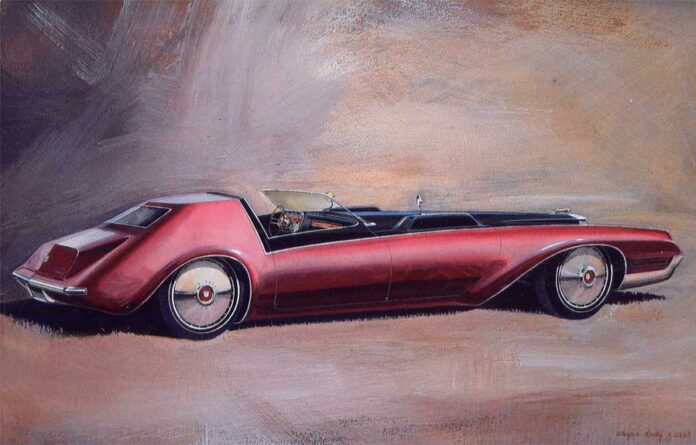 Virgil Exner Sr.’s drawings of the Stutz Blackhawk is considered a beautiful drawings and beautiful car, but possibly there is more to it. Daringly said, it may be that some designers got the green light from their automaker employee to see their design produced based on their “beautiful” drawing. It’s the stuff of dreams – you make a sketch and magic happens. So what the designers created in a few hours or days may have spawned a great design, one that we can still drive around or at least see on the roads.

Many car companies did not allow their designers to take work home with them, in efforts to keep the designs a secret form their competitors. Even old designs will be stored away for years, never to be seen again. There have been occasions when car designer drawings have been displayed at galleries, but only occasionally. Once at the Greenfield Village Car Show a Wayne Kady drawing of a car with a long, long hood, some sort of modern Cadillac with 1930’s Duesenberg proportions. Decades later, a Cadillac concept called The Sixteen embodied this design proposal.

Outside of the automotive world, these drawings rarely get recognized for what they are: art. In terms of definitions, “fine art’ is pretty vague. Car designs done by some artist employed by an automaker or coachbuilder are done for a commercial purpose, i.e. to fit within a certain window of constraints and maybe art–but not fine art. Because we are looking at old design drawings now, unless the artist is there to explain them, we aren’t aware of what restrictions they were working with. Thus, we can never consider design drawings as pure “fine art” done for aesthetics only, because we don’t know the behind-the-scenes rules.

Sticking with the categorization of fine art as something done purely for creative expression, there are reasons car companies do not want their designers doing fine art: They want their employees putting in maximum effort at work, not saving themselves at work to pour all their effort into side work that they will sell at a car show or gallery. Also as the automaker, you paid the designer to work all day, you don’t want the rejected designs taken out and circulated where they could inspire a rival firm. You never know when you are going to go back to an old design. Another reason is that the finished car always has to compromise on some of the details that look so good in the drawings and they don’t want car fans criticizing their design decisions based on an early rendering. And then, too, it tends to throw the focus on the designer instead of the car or the company.

Only on special occasions do automakers allow it. For example, Ferrari let out some design renderings and the artist who created the drawings eventually left to go out on his own. Possibly because he was becoming too well known as the one who designed some of their most beautiful cars, and was able to now reach a broader audience under his own command.

This article has an interesting approach to looking at the early stages of car design and what they can be. The author makes an argument that these design sketches and renderings can be seen in some ways as fine art, though it is a broad term he lays out the reasons for why this title just might apply. I think this is an interesting take, not only because the debate of the definition of fine art is an engaging and evolving opinion, but because I think it forces me to look at my project from perhaps a different light. What would happen if I engaged with my designs as thought they were free moving art, and not just a ridged design process outcome. Especially when we consider car design which is currently defined by a great deal of rules. Of course the “fine art” world is lawless, while the design world may be defined by it, but by allowing freedom into a law defined process, who knows what can be discovered along the way.