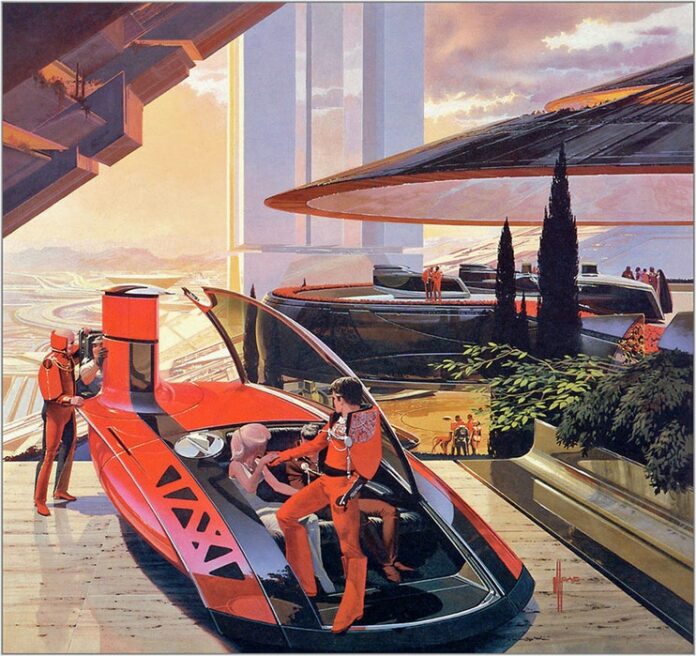 Syd Mead was a visual futurist, automotive designer, motion picture concept designer, industrial designer, and an inspiration to almost everyone working in the design fields. His was a world was larger than ours- the technology was bolder, magical even, the cars and transport sleeker and more luxurious, the architecture more graceful and geometric.

Mead worked on a serious of age defying movies that transcended the current age, though his designs also extended to the real world, even if they were mostly a future projection on what Mead saw life to be like for humanity years from now. The self-proclaimed “Visual Futurist”, Mead brought–to the best of any concept artist’s ability–a sense of science fact into the world of science fiction.

His designs of a futuristic Manhattan depict people using handheld devices long before smart phones were in use. His designs were not just fanciful, many had real-world applications. A futuristic design of a four-legged transport for U.S. Steel even served as the influence for concept artist, Joe Johnston’s design of the Imperial Walkers. Mead’s designs went a far as to give the mechanical beasts some plausibility in their design, especially the joints of the legs. His background in industrial design is always present in his sci-fi designs adding a sense of plausibility, which accounts for the timelessness of the designs and their longevity in popular culture. For instance, his futuristic bike in Tron, is designed from the ground up. Rather than just cool visuals, Mead thought about how the bike would actually function.

Mead explained his design process to The Boston Globe in 1985, when he said: “All ideas go through three stages. The first stage is the idea itself. Thinking of that is a whole specialty in itself, because if something exists someone had to think of it. After that the next stage is documentation. That can be anything from a set of sketches or an oil painting to a written description to a working model. The last step is manufacture. Making it real.”

While his vehicles are intricately designed to sell their functionality, his city-scapes were just as established within the context of a theoretical future. The two designs worked side by side as partners to a greater realization, driving the creativity of the following generations of designers. Tim Soret, the founder of Odd Tales Games sated “Without him, the visual language of science fiction wouldn’t have been the same.”

Syd Mead is one of the most prolific creators in the design field, there is hardly any debating that his imagined concepts in the early 60’s still hold up in the current year. The article makes it very clear that Syd Mead was respected and renowned around the world for his designs and his visually stunning stories. Though why him and why his designs? Well I think its pointed out in an interesting and important way: it was that Mead didn’t just draw up a pretty drawing that is simply visually appealing to the eye, no Mead took it a step further. In his concepts Mead thought about how they would function, how they’d work, how they would move and how the user would interact with them. That, is what may drive the timeless strength of his designs. When I consider my own designs, I am inspired by Syd Mean to think far from the box of visual reality, while still retaining the user friendly environment a design should offer.