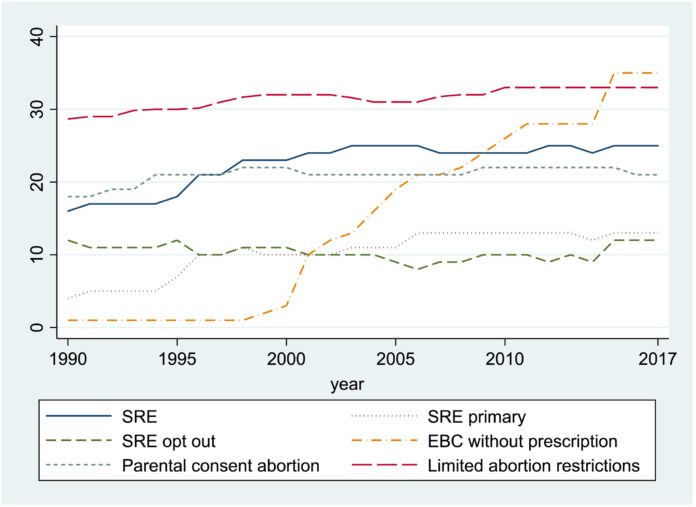 Abstract
To date most studies of the impact of school‐based sex education have focused either on specific, local interventions or experiences at a national level. In this paper, we use a new cross‐country dataset to explore the extent to which laws on sex education affect teenage pregnancy rates in developed countries. We find some evidence that laws mandating sex education in schools are associated with higher rates of teenage fertility. Parental opt out laws may minimise adverse effects of sex education mandates for younger teens. The estimated effects of mandatory sex education are robust to some but not all of our specifications designed to tease out causality. Taken together, changes in national laws relating to sexual health are unable to explain the significant declines in teenage pregnancy rates, which have been observed in many developed countries in recent years.

Discussion and Conclusions
Theory suggests that SRE may have an ambivalent effect on teenage pregnancy rates. Consistent with this, most empirical studies of particular sex education initiatives have found little evidence that they are effective in reducing teenage pregnancies. To date, very little research has examined the impact of laws mandating sex education, and none at all have tested the effect across a range of countries.

we find no evidence that mandatory SRE laws can explain recent reductions in teenage fertility. Indeed, in contrast to those papers, we find some evidence that SRE mandates are associated with increases in teenage pregnancy rates. These differences may be due to the fact that both previous studies are restricted to a single country—the United States. Future cross‐country research might usefully try to identify the effect of differences in the type of sex education mandates across countries.

Mandating SRE to start in the early years of education does not seem to have any significant additional impact on adolescent fertility, whereas allowing for parental opt outs may minimise adverse effects of SRE mandates for younger teens. In addition, there is little consistent evidence that other laws relating to sexual health policy or more generalised initiatives by countries aimed at tackling adolescent fertility are associated with lower teenage fertility.

Aside from policies specifically aimed at reducing teenage fertility, youth unemployment rates are generally associated with lower rates of teenage pregnancy, while there is some evidence that divorce rates are associated with higher fertility.

Another limitation of our study is that we examine only one potential outcome from SRE, namely, teenage fertility. We are unable to test whether sex education laws have effects on other aspects of sexual health—STIs, delayed sexual activity, child sexual abuse and so on.

The evidence we have presented suggests that laws mandating school‐level sex education are unlikely to be successful in tackling high rates of teenage pregnancy. The same is true for laws mandating SRE for early years’ education.

Taken together our results suggest also that policy interventions at the national or state level have limited ability to explain the very significant reductions in teenage pregnancy rates observed in many countries since about 2007. Understanding the reasons behind the post‐2007 reduction in adolescent pregnancy remains a significant challenge.

Comment: This paper argues that mandatory sex education has no positive impact on reducing teenage pregnancy. I think this indicates we might need to think about the sex education from perspectives other than preventing things happening, but maybe preparing for things to happen. Still, there are many factors other than sex education itself that would impact thee wellness of teenagers as the paper mentioned.