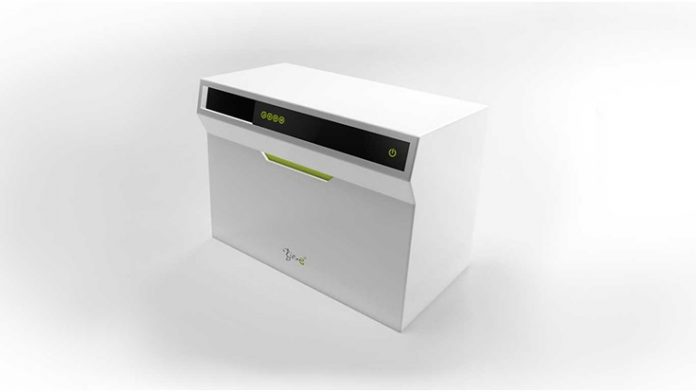 The Poznan, Poland-based makers of Bin-e collection devices say attendees at the Pioneers’17 in Vienna, which took place in June 2017, showed great interest in the devices, which are designed to separate recyclables from each other by material inside the bin.

Bin-e says its product line “will automatically segregate your [discarded items] and free [users of public space collection bins] from the never-ending struggle whether you should throw your package into the plastics or paper.”

The early June Pioneers’17 event in Vienna brought together more than 2,500 people “who create the world of modern technology,” says Bin-e in a press release. “It was no coincidence that this particular place, where business meets innovation, was chosen for Bin-e’s premiere. However, the inventors did not expect the great amount of attention their device attracted.”

“When we found out that we were the only ones from Poland who were given the opportunity to introduce our product in the most crowded place we have ever seen, we immediately realized that it is going to be a big test,” says Marcin Lotysz, Bin-e’s chief technology officer. “The whole team worked very hard to prepare the device on time. Today was a success thanks to everyone who invested so much time, knowledge and money into the development of our smart waste bin.”

Bin-e says when a discarded item is placed Bin-e’s main chamber, proprietary technology allows recognition to occur so the item “is distributed to the right [interior] bin.” Additionally, says the company, the Bin-e has a compression function. “This is important because enterprises pay more not only for unsegregated waste but also for [greater density].”

Continues Lotysz, “When we dug deeper into recycling and waste management data we found out that only 10 percent of trash worldwide is being recycled. What about the rest? It is everywhere, all around the globe, polluting our environment a little bit more every day. So, we came up with a solution to [make the process] less dependent on the decisions humans make standing in front of the waste bin.”

I decided to include Bin-E, because although I have criticism for its heavily tech-driven approach, I do think it’s worth acknowledging that “circumventing” human behavior with technology is a valid possibility. Certainly, it may be more effective at fulfilling the short-term goal of reducing waste ⁠— but I worry that it misses out on the more long-term need to instill a culture of accountability, and a collective normalization of sustainable habits.