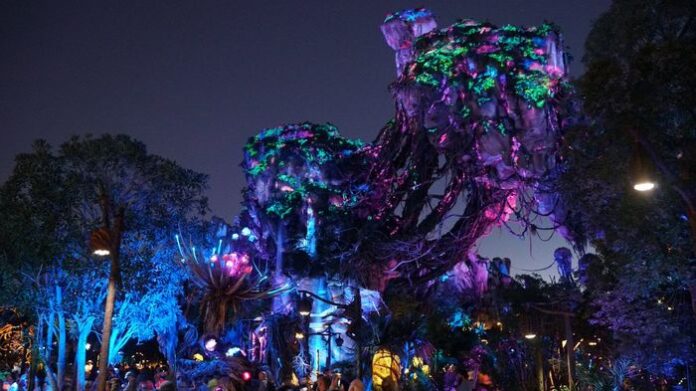 In recent online discourse, there has been a trend of oversimplifying the type of person who enjoys a theme park – specifically American theme parks such as Universal Studios or Walt Disney World. From articles such as this from The Tab, we see the stereotype of the ‘Disney Adult’. A large amount of the critique stems from being involved in this cringey, childish hobby. It is an oversimplification to reduce an entire audience of theme park goers to this one stereotype, and can often devalue the work of theatre and artistry that is put into the everyday running of these parks on an enormous scale.

From the second a ‘guest’ walks into the Magic Kingdom, it has been specifically designed to be an entirely immersive experience. From a team of Imagineers working on creating this, to cast members who implement this daily, it is a transport from the everyday into a new environment. Main Street U.S.A is designed to evoke the sense of old Americana nostalgia. To borrow Jenny Nicholson’s phrasing of the theme park’s ‘inherent transience’, it is clear that this is to be as transportative of an experience as possible. ‘Smell pods’ pump out different scents, such as baked goods as you pass the Bakery. An ambient soundtrack of Disney scores and Broadway’s Golden Age play in the distance. The buildings on Main Street are designed specifically to slope in an barely noticeable manner – this ‘forced perspective’ helps sell the illusion that the famous Cinderella Castle is larger and more impressive visually. To prevent crossover from the different themed lands, there is a huge underground network of tunnels known as the Utilidoors in which workers travel around underground. From its execution to day-to-day maintenance, everything about the theme park is created to be an entirely immersive experience.

This attention to detail is also seen in new innovations with new themed lands, rides and animatronics. In one of the most recent ride releases, Star Wars: Rise of the Resistance, they have created arguably one of the most technically challenging and advanced ride systems to date. The ride combines motion simulators, a trackless ride system and around 65 audio-animatronics. In recent trends, particularly on Tik Tok, many people will pay less attention to the artistry of animatronics, instead saying that they can be scary. While some, particularly older ones (or apparently underwater attractions?) can evoke this uncanny feeling, the recent work that has been put into creating these robots is incredible. In Tokyo Disney, designers were able to capture the classic ‘squash and stretch’ animation from the original Beauty and the Beast film to create animatronics for the ride that bring the cartoon to life, while recent developments in Pandora: The World of Avatar have been able to create fluid, visually expressive animatronics that are incredible to look at, while also being able to perform for up to 16 hours at a time.

It is not only the advances that theme parks have made recently that contribute to people’s interest. In content such as Defunctland and Podcast: The Ride, there has been a growing interest in ‘defunct’ attractions. With the Disney corporation as a huge financial monolith, it is surprising to look at areas where attractions or even entire theme parks have failed. This leads to an interesting phenomenon in which the company will typically leave these to rot. A current popular YouTube genre is people trespassing on these properties where the highly themed, technological creations have been caught on camera as they deteriorate. A famous example of this is the Wonders of Life pavilion: after years of decreasing popularity, an entire building with rides and animatronics was boarded up and was used as a space to hold food events. People could be in this building, unaware of the history and technology that is deteriorating right next to them behind a screen.

As well as the interest in seeing this almost abject sight of a decaying attraction, there has been a resurgence in people’s interest due to nostalgia. Theme parks are unique in that they are created to be experienced, and a filmed ride-through will never quite capture the entire experience of what it is like. The knowledge that something that so many people enjoyed will never be experienced again, and will only live on in people’s memories and history, creates a special form of melancholy. The aforementioned creators explore this idea, often creating long-form deep dives into abandoned attractions by giving the history and experience of what the rides were like. This nostalgic melancholy is a unique feeling rarely found in other art forms, often exacerbated by the fact that attractions which once brought so much joy to so many people can now be hidden away behind doors, left to decay.READ MOREMixed mediums: the future of art?

In this oversimplification of understanding why someone might enjoy a theme park, it often leads to overlooking the massive scale of work that is put into creating and maintaining such a huge apparatus. However, these experiences create an escape from the everyday that can help some people to find enjoyment, specifically playing on feelings of nostalgia and the park as a liminal space, which operates differently to the outside world. It’s also often popular with neurodivergent people; its attention to detail offers a large amount of information to research, while its transportative environment provides a place to explore and experience safely. There is a huge level of showmanship that takes place every day in these parks, which is why it’s important to realize just how much work goes into their maintenance and creation. Particularly in the pandemic, there has been a huge amount of lay-offs and unfair dismissals of Cast Members, who are crucial to creating the artistry of these parks. Realizing how much goes into these parks to create this experience helps celebrate the work of everyone who helps create this magic, as well as recognizing their importance as something not expendable to the Park.

Comment: This article does a nice job of explaining some of the more in your face and human aspects of the arts at theme parks around the world. Many employees take on a role or persona when going into work at one of these theme parks. They become part of the environment and serve as a character that is contributing not only to the story of the environment that they are in, but also to the story of the guest who is experiencing the whole theme park. This sort of artistic action is coupled with the design endeavors found in the Star Wars article to create a unified experience. While not directly related to large scale AM technologies, it would be reasonable to think AM tech can contribute to the over all experience here by adding particular components to the environments that perhaps have complicated internal structures that are only capable of being produced on an additive manufacturing machine.