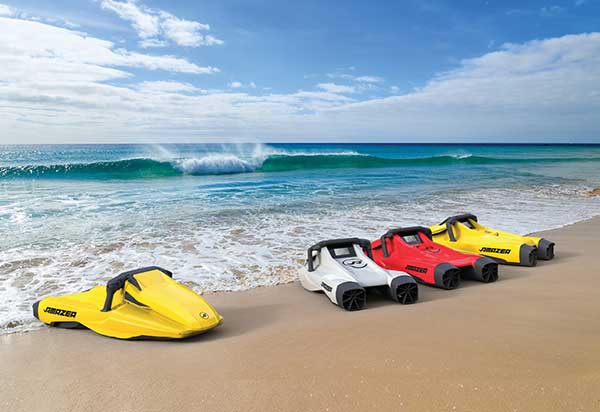 JAMADE’s Amazea breaks the mold for water sports innovation in various ways. The vehicle is an underwater scooter, which replicates a dolphin’s body ergonomics for faster movement, and it is also emissions-free with low noise operation—an attempt to minimize impact on the marine ecosystem.

Another point of disruption: 75% of the Amazea—specifically, the scooter’s body and front parts—are produced with BigRep large-scale 3D printing technologies in contrast to using traditional casting or injection molding methods.

Large-scale additive manufacturing (AM), and the BigRep One printer in particular, fit the bill because they deliver cost efficiencies along with better accuracy and quality compared to the high investment associated with traditional tooling, JAMADE founders maintain. That’s especially important in light of the company’s expectations for modest sales in Amazea’s first year as marketing and distribution efforts ramp up and customer demand builds.

Just as JAMADE charts new waters with its manufacturing approach, other companies in industries like aerospace and automotive are beginning to see value in trading up traditional manufacturing practices for large-scale AM technologies.

The ability to 3D print large parts either in-house or through a specialized service bureau significantly shortens lead time compared to shipping tooling and parts overseas for production or waiting for a third-party player to create custom tooling. Plus, advances in metals 3D printing technology and slicing software along with new materials and lower-cost printer options are making large-scale AM technology more accessible for companies to deploy on a production basis, not just for intermittent prototyping.

“The technology had to mature to the point where people can rely on it to produce quality parts, whether that’s Fused Deposition Modeling [FDM] machines, powder-bed machines or now large-format metal additive,” he says.

Large-scale AM technologies have been around for some time, but they were traditionally extremely expensive and highly specialized, requiring multiple experts to configure, run and maintain 3D printing operations. As large-scale AM technologies evolved and 3D printing, in general, gains traction, companies are more willing to consider the methods as a legitimate alternative to traditional manufacturing modes such as molding, milling and casting.

The companies designing novel products in emerging categories such as electric mobility solutions are already predisposed to thinking outside the box and therefore are more open to modifying long-standing processes, including new modes of manufacturing, says Frank Marangell, chief business officer and U.S. president for Big Rep, which specializes in industrial AM printers and services.

The abrupt disruptions to in-person work environments and to the global supply chain resulting from the sudden onset of the COVID-19 pandemic have also given many companies pause to consider large-scale AM when they might not have previously.

“People now see the challenges of buying a tool or part from a foreign country and what the supply chain risks are,” Marangell says. “COVID-19 exposed why it’s beneficial to have more in-house manufacturing than buying parts.”

Technologies at a Glance

BigRep’s area of focus is delivering large-scale AM systems targeted at applications supporting industries like aerospace, automotive and consumer parts. Companies that have an incentive to redesign their products to be lighter and stronger are natural candidates for large-scale AM as are companies that are heavily reliant on custom forms and molds as part of their manufacturing processes, Marangell says.

The BigRep PRO was designed specifically for manufacturing applications with a build envelope of 1 cubic meter with metering extruder technology (MXT), which offers speed, precision and control over materials deposition when dealing with large-scale parts.

The BigRep PRO’s print bed is outfitted with sensors and hardware to allow for semiautomatic print bed leveling—another way the printer ensures repeatable, high-quality parts. One more differentiator is the integration of a state-of-the-art Bosch computer-numerically controlled motion-control system, designed to deliver maximum responsiveness and accuracy along with closed-loop controls.

Untethered from the volume constraints of a traditional build plate, large-scale AM gives engineers the freedom to orient parts in a way that makes the most sense, whether it’s to deliver specific strength properties, to ensure finer details are captured or simply for economies of scale to output multiple parts in a single build.

RIZE is coming at the large-scale AM market via a partnership with South Korean-based printer manufacturer Sindoh Co. Ltd. The pair collaborated on the design and release of the sub $5K RIZE 2XC professional desktop composite 3D printer and followed up with the RIZE 7XC, an industrial composite variation that just recently launched. It is designed from the ground up to support industrial manufacturing applications at scale, according to Andy Kalambi, RIZE CEO.

A key challenge with early large-scale AM technologies relates to material science—ensuring that supported materials can output a high-quality print at such large sizes, he explains. The 7XC addresses that problem via its use of composites, a material set that is not yet fully implemented by most large-scale AM systems, and specifically those that are not cost prohibitive, Kalambi says.

Having a large-scale AM printer optimized for composites is crucial for mimicking the properties of metal parts. It is also key to using the technology to manufacture parts with organic shapes and unusual geometries to achieve lightweighting goals or parts consolidation, which are common design strategies across industries such as automotive and aerospace.

“There’s a tendency to warp when you lay over a large volume or surface and you need accuracy when building large parts,” Kalambi says. “You need to ensure large parts are uniformly strong when 3D printing and that everything is done in a consistent and uniform way.”

Like its original XRIZE printer, the 7XC has a dual-jet system, one of which releases a safe agent between the supports and parts, ensuring supports can be easily stripped away without requiring any post-processing rework. The system, which launched for under $20,000, is also affordable compared to other large-scale AM offerings that cost in the hundreds of thousands of dollars, he adds.

Velo3D has carved out a specialty area in metals, not composites, though it, too, places an emphasis on addressing challenges related to supports. The firm, which caters to the oil and gas sector, among other industries, offers SupportFree technology that enables printing at low angles and overhangs down to zero degrees as well as large diameters and inner tubes up to 100 mm without reliance on supports.

The Sapphire laser powder bed fusion metal AM system, designed for SupportFree production output, is being readied in a version that supports a 315-mm diameter by 1-meter height build envelope to enable output of large-scale components. The existing version of the Sapphire printer has a 315×400-mm build envelope.

As the need for large-scale AM output grew, Velo3D moved to evolve its printer offerings to support taller part and component output instead of the wider build envelopes embraced by many of its competitors. Although there is a need for both configurations, Velo3D thought the taller approach was a less-served opportunity and it was also easier to evolve its existing hardware without a total redesign, according to Zach Murphree, vice president of technology partnerships at Velo3D.

“When you go wider, you have to change the laser and a lot of other aspects of the machine—it requires a completely different recipe to run the system,” Murphree says. “With this, the machine remains essentially identical to the standard configuration of the Sapphire just with a taller elevator. That shortens development time, lessens costs and keeps things easier for qualification.”

Knust-Godwin, a precision tool and component manufacturer, has placed an order to produce with latest version of the Sapphire, slated to ship later this year. Knust-Godwin, which is leveraging the large-scale Sapphire machine to create a part for oilfield drilling, chose the newer system because of its reliability and confidence it would produce industrial-grade parts without compromise to quality, says Mike Corliss, vice president of technology at Knust-Godwin.

With many of the large-scale AM systems, there are high operating costs associated with having to source all the powder to cover the entire build volume even when the particular part heading for production is not wide, but tall.

“The operating costs are down and there is less risk with the [Sapphire] machines,” Corliss says. “It’s a short, tight envelope … and we’re not moving lots of mechanical parts over a wide area, which could surface problems in quality and accuracy.”

Challenges Along the Way

Though interest in large-scale AM as a manufacturing alternative has increased lately, challenges remain. One of the biggest obstacles is getting customers to recognize the advantages, especially those who may have worked with older generation systems and services and got burned in the process.

That’s one of the biggest hurdles for Thermwood Corp., a maker of CNC routers in addition to LSAM, its proprietary large-scale AM systems for 3D printing of thermoplastic polymers. LSAM uses what Thermwood calls the “near net shape” approach to part production where the part is printed at a high speed slightly larger than what’s called for and then trimmed to meet the final size and shape specifications.

Thermwood also has a patented compression wheel that, in tandem with large print beads and a patented bead board, creates solid, fully fused, void-free structures that sustain vacuum in a pressured autoclave at elevated temperatures without the need for add-on coatings, says Dennis Palmer, the company’s vice president of sales. Though the technology has greatly improved the integrity and quality of large-scale AM parts, many potential customers remain skeptical.

“They are gun shy and now we have to prove that our prints work,” he explains, adding that the customer tests have provided some valuable lessons. “No one gives us anything easy that they want to print—they give us their most difficult projects,” Palmer says. “It’s been a good learning process.”

Having expert talent on staff or access to talent who understands what can be done with large-scale AM is also important to maximizing the benefits of the technology for manufacturing.

“To make the business case work, a part should be redesigned for AM and that just takes time,” notes Lincoln Electric’s Douglass. “A lot of the challenge is generating awareness of AM as a means to produce large parts and then designing and thinking about parts for AM.”

Comment: This article does a nice job summarizing some of the shifts that are being made in businesses in order to better facilitate the integration of additive manufacturing into their model. This is particularly in reference to Amazea which is using the technology to produce 75% of their underwater scooter’s parts. They are finding that 3D printing is proving to be a more precise and effective way of manufacturing as opposed to traditional tooling. The article later goes on to explain how additive manufacturing is allowing businesses to manufacture pieces that are lighter and stronger. Not only is this beneficial to the company, but also issues such as the Covid 19 pandemic have proven why internal supply chains are necessary for timely delivery of services as opposed to sourcing parts elsewhere. I think the article ends on a good note, expressing that AM is a manufacturing method that simply is not well enough known. People don’t realize they can print the things they use for work everyday. This is where I as a designer can step in and help.