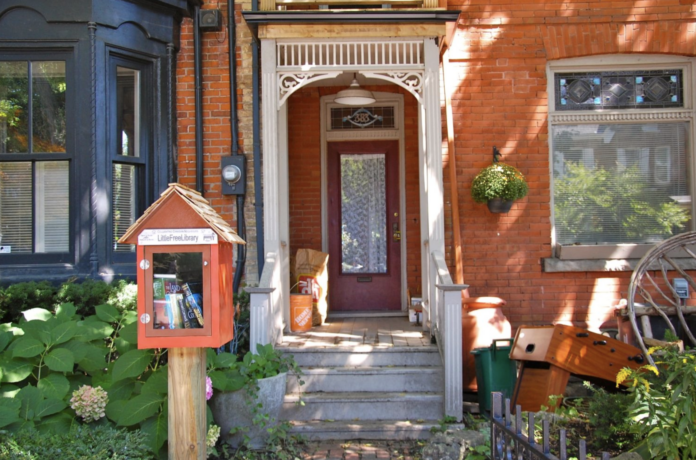 Last week, Rich Reyes-Gavilan discovered a note appended to the Little Free Library next door to his home in Mt. Pleasant.

“Little Free Libraries, however adorable and well meaning, do more harm than good for the communities in which they appear,” the anonymous missive begins. “Rather than promote literacy or building communities, Little Free Libraries (LFLs) introduce a host of problems including stealing patronage from existing public library branches, the corporatization of literary circulation, and helping to gentrify urban neighborhoods.”

Reyes-Gavilan, the executive director of the D.C. Public Library, was confounded and surprised to see such ire directed at the oversized birdhouses that have become official book exchanges in neighborhoods all over the country. He thought at first that someone who knew he lived nearby had posted the note in some kind of misguided attempt to help him out, he tells DCist.

“I just thought it was maybe somebody who knew me and was trying to help me. Or maybe hurt me. I just couldn’t tell,” Reyes-Gavilan says. He didn’t agree with contents of the note, and spur of the moment, he decided to snap a photo and post his thoughts to Twitter.

“OK, I just want to assure my neighbors that I am not responsible for this screed,” the tweet read. “We at @dcpl are not against little free libraries and don’t see them as competition. Some years ago I found a Calvin & Hobbes book in one that I looked at momentarily.”

Several people that DCist spoke to agreed with Reyes-Gavilan that the small book exchanges are no replacement for public libraries.

“We go to the public library all the time for the story time and the socialization,” says Canden Arciniega, a Silver Spring resident who has lived in the D.C. area for about a decade. Arciniega has two young children who love both Little Free Libraries and public libraries. “I think of libraries as less a place where you can get books and more as a place where you can get an insane number of services for free,” she says.

Diamond Newman, a Capitol Hill resident who uses and loves Little Free Libraries, says that they create an opportunity to connect with people in a city where she feels people are often “gathered, but not connected,” she tells DCist.https://platform.twitter.com/embed/index.html?creatorScreenName=dcist&dnt=true&embedId=twitter-widget-0&frame=false&hideCard=false&hideThread=false&id=1189529711732514817&lang=en&origin=https%3A%2F%2Fdcist.com%2Fstory%2F19%2F11%2F04%2Fanonymous-note-decrying-little-free-libraries-sparks-gentrification-debate%2F&siteScreenName=dcist&theme=light&widgetsVersion=ed20a2b%3A1601588405575&width=500px

Reyes-Gavilan says he meant his tweet to be lighthearted (the shade you’re clocking in the last line was intentional, he says), but also informative. “I think as chief librarian for Washington, D.C. it’s incumbent on me to comment whenever I can on things that may be of broader interest,” he says. “I didn’t think it was going to touch such a nerve, frankly.”

But touch a nerve it did.

“What a ridiculous sentiment and how cowardly not to sign the letter,” one person responded to the tweet. “People in this city have lost their goddamn minds,” reads another. “Somebody needs a better hobby. May I suggest … reading,” a third commenter wrote.

While the majority of replies expressed confusion or anger at the note’s message, a few appeared to be in agreement.

“I used to run a book distro that superficially resembled a LFL. When people would leave their (99% garbage) books, we discarded them. Why? Because LFL’s are everything this poster says they are. And I’m glad someone said it,” said one.

As the tweet gained some traction and attention (far more than his usual tweets, Reyes-Gavilan says) local blog Popville posted his tweet. It generated more than 100 comments, nearly all of them in angry opposition to the note’s contents. DCist was unable to find or contact the author of the note, who may have also stuck several more notes to Little Free Libraries all over Mt. Pleasant with an adhesive that’s proving difficult to remove.

The mini controversy was surprising to Reyes-Gavilan and many others, but it’s not the first time such an argument has been made about Little Free Libraries. In 2017, two librarians in Toronto, Jane Schmidt and Jordan Hale, published a paper in the Journal of Radical Librarianship arguing that Little Free Libraries are “a highly visible form of self-gratification cleverly disguised as book aid.”

The small book exchanges, which are generally registered with the official Little Free Library nonprofit that started in Wisconsin in 2009, mostly show up in wealthier, white neighborhoods, Schmidt and Hale found. Little Free Libraries are “examples of performative community enhancement, driven more so by the desire to showcase one’s passion for books and education than a genuine desire to help the community in a meaningful way,” they write.

“There was something that kind of irked me about the title,” Schmidt told Citylab that year. “As a librarian, my gut reaction to that was, ‘You know what else is a free library? A regular library.’”

Reyes-Gavilan says he finds such arguments misguided. Thinking that LFLs are taking business away from public libraries is “like saying yard sales are detrimental to Amazon.com,” he says.

In response to arguments that the boxes fail to eliminate book deserts or improve literacy, he says “That’s all true. But they’re not designed to do that. And I guess I would be angry if their purpose was to do that, but their purpose is to create little harmless book exchanges that create serendipitous moments for people.”

But are they harbingers of gentrification?

“In neighborhoods with more disposable income, there might be more people with money to spend on getting one,” Reyes-Gavilan says. “I can see people viewing Little Free Libraries the way they view dog parks or bike lanes, but that’s almost not for me to comment on.”

Arciniega tells DCist she buys the argument that Little Free Libraries are, at the very least, a signal of gentrification. A couple of months ago, she tried to set one up herself to help rotate some children’s books out of her home, and she was overwhelmed by the amount of work people with LFLs appear to put into the endeavor. They had themed weeks for their boxes, decorating them and buying books for the occasion. They celebrated holidays with new books for their boxes, and people scouted for cheap books to buy to keep their little libraries stocked. Not to mention, buying an LFL from the official source (as opposed to building one yourself) can run you hundreds of dollars. Even if none of that was technically required, Arciniega says she couldn’t help but feel pressure to devote time she simply did not have.

“You have to have time and money for this,” she says. “I am middle class and even I don’t have the time or money for this … I can’t see a lot of working families who don’t have much disposable income having the ability to do it.”

Newman says she’s never heard of them being related to gentrification, but upon thinking about it, she only sees them “in certain neighborhoods.”

Taylor Mulcahey, a Bloomingdale resident who also loves Little Free Libraries, says that while she does believe that LFLs are more available to some residents than others, the note appended to that Mt. Pleasant book box is using them as a “scapegoat.”

“When we are pushing people out of neighborhoods, that’s a problem and a very valid issue, and we should have language and ways to talk about that, and it should be showing up in internet conversations,” Mulcahey says. “But you stir controversy up over something like this and then people put their energy into that instead of talking about like actual problems. And people love controversy so of course a bunch of people engaged with that tweet … But I just don’t think it’s productive.”

My comment: I was reading a few anecdotes about stewards and their experience maintaining their LFL. The goal of LFL is to share books and though it’s not a perfect system, it encourages people to drop off books of their own. The “in certain neighborhoods” comment was intended to provide criticism to LFL, but it only shows that not everyone knows about LFL, more people (stewards) should take on their own LFL, and some people can’t afford to maintain one.