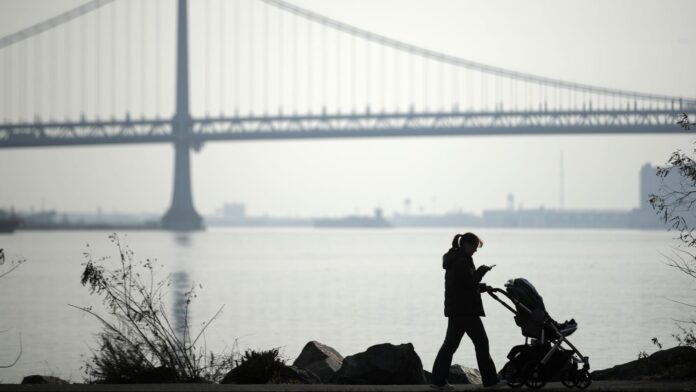 Parents in rich countries spend a lot more time with their kids today than they did 50 years ago. But phones are increasingly creeping into those interactions, impacting their depth and quality.

For example, more than a quarter of American adults now report that they are online “almost constantly,” according to a Pew Research Center survey published last week. Parents’ increased smartphone use has experts concerned about the potentially devastating consequences this might have for the development of babies and toddlers.

“The most important thing for little people in the zero-to-three range is interactions with human beings,” says Kathy Hirsh-Pasek, a senior fellow at the Brookings Institution. “Anything that disrupts the timing, or the meaningfulness, or the emotional quality of that interaction can have consequences on both parents and kids and on their relationship.”

Brandon McDaniel, an Indiana-based researcher on family relationships, has coined a word to describe this phenomenon: “technoference.” And it has become a global problem, Hirsh-Pasek says (more than 5 billion people worldwide are now estimated to own mobile devices). “I don’t care if you’re in Mongolia, or China, or the United States or Great Britain,” she says. “Kids grow up the same way. They need human interaction.”

How does parents’ tech use affect children?

In 2015, security software company AVG Technologies surveyed 6,000 families (pdf) with kids between eight and 13 years old in ten countries, including Brazil, Czech Republic, and New Zealand, about their tech use. Over half of children said their parents checked their devices too often. More than half of parents agreed. Meanwhile, 32% of kids reported feeling “unimportant” when parents checked their phones.

There are many things that can get in the way of a parent’s emotional bond with their children, including mental illness or physical separation. But one of the most common today is probably technology. This becomes particularly critical in interactions with young children.

When a parent responds to a baby’s coos or cries by picking them up or playing peak-a-boo with them for example, the back-and-forth helps build the baby’s brain architecture, which is later tied to children’s learning, behavior, and health outcomes. Child development experts have different names for this, but one of the most common is “serve-and-return.”

Babies need a loving, responsive, and attentive adult around them to learn and thrive. These interactions are “both expected and essential,” according to Harvard’s Center on the Developing Child, and “their absence is a serious threat to a child’s development and well-being.”

A quick scroll through Instagram or hastily written response to an email might not seem like a big deal, but babies are constantly learning from the world around them. Parents who are absorbed in their phones aren’t teaching their kids crucial skills, like language.

Hirsh-Pasek, an expert in infant language development, found that “the fluency and connectedness of parent-child interactions at 24 months of age predicted children’s language outcomes a year later.” In a 2017 experiment (pdf), Hirsh-Pasek and her co-authors showed that, when parents tried to teach their 2-year-old words but were interrupted by a phone call, the toddlers didn’t learn the words, whereas the ones whose parents were not interrupted did learn them.

“The adults in the little people’s word are way more important than they will be as the kids get older—we are their gateway to the world,” says Hirsh-Pasek.

When their parents are absorbed in their devices, kids may also act out (pdf) in a bid to get their attention back, and parents may respond negatively. In 2013, researchers observed 55 groups of caregivers and children between zero and 10 years old eating together in fast food restaurants across 15 neighborhoods in Boston. Of the 55 caregivers observed, 40 used a mobile device. Sixteen used the device almost continuously throughout the meal, displaying what the researchers called high levels of “absorption,” defined as “the extent to which the primary focus of the caregiver’s attention and engagement was with the device rather than the child.”

When the kids tried to get their tech-absorbed parents attention, they were scolded, talked to in “a somewhat robotic manner,” or physically pushed away.

Other studies have also found that parents in these situations interact less with their children and are more hostile towards them.

In 2017, McDaniel and behavioral pediatrician Jenny Radesky surveyed parents from 170 US families with children under five about their tech use and their child’s behavior. Only 11% of participants said technology didn’t interfere with their interactions with their child; 48% reported that technoference happened three or more times a day.

The researchers found that mothers’ reports of technoference was associated with children’s “externalizing and internalizing behavior,” like whining, sulking, restlessness, or temper tantrums. This wasn’t true for fathers’ reported technoference. (The authors had several different theories for why that might be, including that kids in their sample might spend more time with mom than with dad, making mobile devices more disruptive to that relationship, or that children “co-regulate their emotions and behavior differently” with each parent.)

At a very young age, children “don’t have the cognitive capacity or the resources to … communicate with you and say I don’t like this, it’s really hurting me,” explains McDaniel. So, they act out (pdf).

The study has several limitations, including the fact that its sample population skewed towards white, educated parents, and that it relied on parents self-reporting. But similar findings in other studies and observational work lend credence to its conclusion that, even when it’s infrequent, technoference may be “associated with greater child behavior problems.” As Radesky told Quartz in an email, “kids are watching us” and learning from us all the time, meaning that “even if we aren’t interrupting play or conversation with them, we might still be influencing their own tech use habits.”

Technology can be an incredibly helpful tool for families. Online forums can provide support for overwhelmed parents, and high-quality educational apps can help structure children’s learning in a personalized and meaningful way. And we don’t yet know enough about the connection and longterm impact between parents’ tech use (as well as tech more broadly) and child development, says McDaniel. But experts agree that, when it comes to infants and toddlers, it’s best to avoid or severely limit screen time. Why not parents as well?

Hirsh-Pasek believes limiting tech use could benefit parents as well as their babies. “There’s nothing more addictive than looking into a young child’s eyes, and listening to them, and learning about their world,” she says. Technoference has, “in a sense, robbed us from having those kinds of rich experiences.”

Comment: This article emphasizes that parents have a massive role in the way technology affects children. I assume most parents would not say that their smartphones are more important than their children, yet technology asserts itself as the number one priority on the day to day.