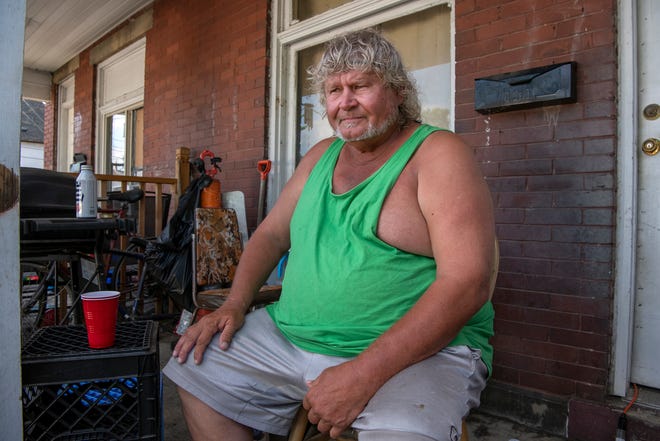 By: Eric Lagatta
The Columbus Dispatch
Nov. 3 2020
Source: https://www.dispatch.com/story/lifestyle/2020/11/03/franklinton-experiences-rebirth-some-worry-being-left-behind/3571581001/
Neighborhood leaders are grappling with how to preserve Franklinton’s history as a working class hub even as a new generation of residents reshape its identity.
Wayne Street cracked open another Miller Lite and pulled up a chair on his porch as old-time country music drifted from inside the duplex.

It was approaching 5 p.m. on this hot August afternoon, and the 62-year-old was enjoying some well-earned relaxation after a long day at work doing traffic control for a utility company.

Most evenings you can find Street unwinding on his porch after a 10- or 12-hour shift. From his elevated vantage atop a hill at Princeton Avenue and Town Street, on the west side of Franklinton, Street has a front-row seat for the gun violence, prostitution and drug activity that plagues the neighborhood.

“It’s just getting to be a thrill every night,” Street said as he laughed and shook his head. “It’s like the Wild West out here.”
But not all who live in Franklinton, a neighborhood immediately west of Downtown and the Scioto River, share the same experiences.

Jordan Davis moved there in July 2019 with her now-fiance Brian Bernstein to Gravity, the high-end retail and residential development that opened in April 2019 on W. Broad Street. Just a mile east of where Street lives, it feels a world away in many respects.
Davis has immersed herself in Franklinton’s growing arts scene and began frequenting trendy establishments, including Land-Grant Brewing Company and Taft’s Brewpourium.

“I love the art component of the neighborhood,” said Davis, 32, director of the Smart Columbus transportation initiative. “I think we’re really happy where we are, and I think it’s exciting to be part of something new.”

For recent transplants such as Davis, Franklinton might feel like it’s in the midst of a cultural renaissance. The eastern side of the neighborhood has evolved into a district defined by vibrant public art, swanky apartment buildings, upscale breweries and lively festivals.
It’s a momentous rebirth for Columbus’ oldest neighborhood, one shaped by blue-collar workers — thousands of whom still work in Franklinton’s industrial corridor on McKinley Avenue, according to the McKinley Avenue Employers Association — but one that also has struggled with poverty, transiency and vacant housing. Two decades ago, 58% of Franklinton residents made less than $25,000 and 18.4% of its houses were vacant, according to U.S. Census Bureau data.
Route 315 cuts the neighborhood in half, further alienating those low-income residents living largely in western Franklinton who wonder what their future holds as a higher-earning demographic “discovers” eastern Franklinton. Neighborhood leaders grapple with how to preserve the neighborhood’s history as a working class hub with Appalachian roots for those such as Street, even as a new generation of residents such as Davis reshape its identity.

“We want this to be a neighborhood where we honor the history of what made it great all along,” said Trent Smith, the executive director of the Franklinton Board of Trade, which represents the neighborhood’s businesses. “Where the people who have been here the longest and been through the challenges will want to stay and can afford to stay.”
From “the Bottoms” up
About a year after Bruce Warner moved to Franklinton, the neighborhood was devastated by its second horrific flood of the 20th century.

The flood of 1959 wasn’t as bad as that of 1913, which killed 93 people and left 20,000 homeless, but it was enough to further destroy Franklinton’s infrastructure — giving rise to its derisive nickname “the Bottoms.” Warner stayed, and even bought his first home in Franklinton in 1961 on Hayden Avenue.But many didn’t. Western Franklinton alone saw its population cut in half from a high point of 18,154 in 1950. Since at least the 1980s, Franklinton’s entire population has hovered a little above 15,000.

“The flooding was pretty traumatic,” said Warner, who at 81 has been active in many facets of Franklinton for decades. “That’s when a lot of folks who could afford to leave went somewhere else.”

Development and investment was effectively halted for two decades beginning in 1983, when the Federal Emergency Management Agency officially declared the area a floodplain. It wasn’t until 2004 that a $134 million floodwall covering a 7-mile stretch of the Scioto River was completed, both protecting Franklinton from future floods and allowing for construction permits to once again be issued in the area.

Fast forward to 2020 — nine years after former Mayor Michael B. Coleman singled out Franklinton in his State of the City address as a target for revitalization — and the neighborhood seems to be rebounding as a new generation of renters and homebuyers show interest in the area. As recently as 2018, the Census’ American Community Survey indicated that Franklinton’s median income had grown to $35,975.
“I found solace in this neighborhood,” said Morley, 33, who had to move in with her parents in Upper Arlington at the start of the coronavirus pandemic. “I would still be there if it weren’t for unemployment and the virus shutting things down — it’s such a wonderful place to be an artist.”

She was hardly the only artist who flocked to the area after the eastern side of the neighborhood rebranded itself with the creation of the Franklinton Arts District, a nonprofit organization that promotes the neighborhood’s artistic culture. Gallery spaces such as the Vanderelli Room and Roy G Biv have found homes in the area, and Wild Goose Creative, a nonprofit arts organization, has plans to relocate to a building on McDowell Street.

Morley still rents studio space at 400 West Rich Studios, a former abandoned factory that, along with the neighboring Chromedge Studios, is an enclave of 150 woodworkers, painters and sculptors who rent space to create and display their work.

“It’s a haven,” said Stephanie McGlone, the community director at 400 West Rich. “They’re among this community, and it’s theirs.”
Combating the stigma
Michael Bush has lived in western Franklinton’s since 2017, and like 70% of the neighborhood’s residents, he is a renter. The 45-year-old moved to the area after spending time there with friends, and he has since developed a sense of belonging.

“I want to stay close to this,” said Bush, a retirement counselor for the Ohio Public Employees Retirement System.
He’s looking to buy a house now, and his first choice would be one that was refurbished by the Franklinton Development Association, a community-development corporation that has transformed the neighborhood’s housing stock since its founding in 1993.

Jim Sweeney, who ran the development association from 2002 to 2016, used affordable-housing grants to bridge the gap between the cost of construction of a house and its final appraised value. By doing so, Sweeney said he hoped to drive up the housing values, giving financial incentive to owners to improve and maintain their homes, eventually attracting higher-income residents.

His goal was to create a mixed-income community to attract more retail options and, perhaps one day, a grocery store — often cited in neighborhood studies as the primary desire of residents.

“When I first got here, there was a sense of hopelessness, a stigma,” said Sweeney, who oversaw 150 units — both houses and apartments — rehabbed for renting and ownership. “We tried to change the stigma.”

But redevelopment efforts haven’t come without concerns among residents that gentrification is pushing low-income residents farther west into the Hilltop. Years ago, the Columbus Metropolitan Housing Authority razed three public housing complexes around the site of what’s now River & Rich, a $65 million residential and retail development. It’s just one example of the swath of mixed-use development that is cropping up around Franklinton.
Gravity’s first phase — a $72 million project — is now entering Phase 2, which includes a massive development across an entire city block between West Broad and State streets. And at the site of Mount Carmel West, Thrive Companies plans to break ground on what will be a mixed-use development replacing the inpatient hospital, which is relocating to Grove City, said Steve Bollinger, Thrive executive vice president of development.
As high-end development continues, more residents with lower incomes could find themselves displaced despite the efforts of social service organizations. Development has included low-income housing projects, and though Gladden Community House, the Refuge Ministries and Lower Lights Ministries all try to help by providing housing and addiction treatment services to low-income individuals, leaders of those groups wonder whether it’s enough.

“If they don’t have a place to live after graduating from our programs, that could be challenging,” said Emmalyn Jerome, the director of Rachel’s House, a housing program through Lower Lights Ministries for women who have been released from prison. “The folks who used to live here are being pushed farther west.”
‘I don’t want to be priced out.’
Tracie Chrysinger had been living with her aunt in the Hilltop for four years before she found a place of her own several months ago in Franklinton.

The 51-year-old, who rents a duplex in western Franklinton, didn’t move far enough to escape blight that is reminiscent of her former neighborhood. But Chrysinger still sees an area on the upswing and hopes that its potentially bright future has a place for her.
“I hope that I can stay here for awhile,” said Chrysinger, who does not work but is on Supplemental Security Income for an illness. “I don’t want to be priced out.”

Gentrification concerns seem to weigh on neighborhood leaders, who speak of a desire to pave an accessible path to home ownership by fostering access to subsidized housing and both public and private loan programs.

Eric Skidmore, who became executive director of the development association in January 2019, said the organization plans to build a 10-unit low-income apartment building in addition to building five houses for the Central Ohio Community Land Trust, which ensures the homes are permanently affordable to income-eligible buyers.

“We want to do everything we can to address maintaining housing options for those people,” Skidmore said.

As density increases in the area, Trent Smith of the Board of Trade predicts that more businesses will flock to West Broad Street — Franklinton’s main artery — transforming it into a booming commercial corridor. The recent formation of the Franklinton Special Improvement District — tasked with beautification, safety and outreach efforts — should help turn the tide, he said.

“A lot of the dining options haveleft, and we want those back,” Smith said. “I think there’s this real spirit in the neighborhood of, ‘Let’s figure this out.’”
An uncertain future
As Wayne Street sipped his beer, dump trucks and rumbling motorcycles occasionally whirred by on neighboring Town Street.

The Lucasville native moved to Franklinton four years ago after a divorce, and said he’s finally seen redevelopment efforts reach his neck of the neighborhood six years into a 20-year plan approved by city council in 2014. (A plan focusing on the eastern part of the neighborhood passed in 2003.)
“The farther you go east the better the housing has been developed,” said Street, who rents his duplex with three friends, “And they’re starting to work down here to get things right.”

But he’s not without his doubts. Like many in the neighborhood, Street is unsure about what the future holds. Will development efforts push home values to a level he can’t afford?Is talk of revitalization in West Franklinton just empty words? And while he waits to find out, will he live in fear of the crime that surrounds him?

“It’s a wild area, and I’m a pretty wild fella myself,” he said. “So I’ll deal with what I gotta deal with.”