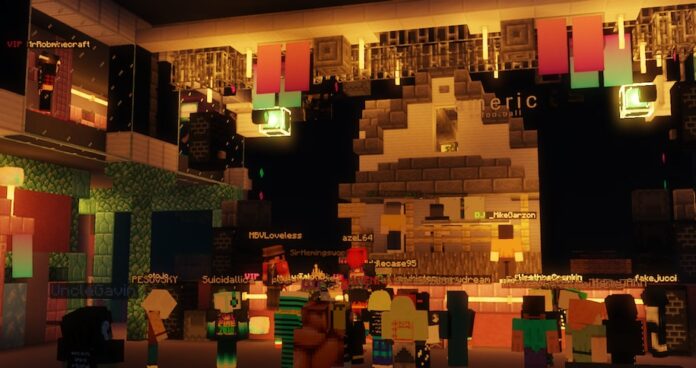 These concertgoers weren’t standing six feet apart. In at least one instance, three attendees were actually teetering on one another’s shoulders like a bizarre statue, the top fan touching the ceiling.

But that wasn’t a problem, because the entire thing was virtual. Welcome to Nether Meant, a music festival that took place entirely within the video game Minecraft.

The event was the latest in digital festivals created and curated by Open Pit, a virtual events producer. Instead of spending months creating massive festival grounds like they have for Coachella and Mine Gala, the team spent two weeks creating a pixelated, scale recreation of the actual Brooklyn venue Elsewhere, which they dubbed Elsewither. Their primary goal? To provide some at-home quarantine entertainment with “fun, unique, community-driven chaos,” said Robin Boehlen, the org’s community management lead.

Interested parties could “attend” in a few different ways. Some watched on the video game streaming site Twitch. To really get into the action, though, you needed to log into Minecraft, plug in the proper server info and, voilà!, you’d pop to life in a hallway and then explore the venue through your first-person viewpoint.

Purchasing a VIP pass (with real money) allowed access to special cordoned-off parts of the venue and the chance to chat with the artists on the gamer hangout app Discord. Meanwhile, the nearly 100,000 unique viewers on Twitch were encouraged to donate money to disaster recovery org Good360, which ended up with roughly $8,000 in proceeds.

The primary method of communication was an enormous group text chat — the game doesn’t allow for individual conversations — which mimicked crowd noise.

“It gives us an opportunity to play some fun stuff that we’d never really play, even in a DJ set,” said Anamanaguchi guitarist Peter Berkman, explaining “no one’s really expecting anything.”

For a first-timer, the experience can be equal parts fascinating and confounding. To avoid disappointment, it’s best to think of it more like a video game than an actual concert — particularly since the music isn’t actually live. Most of the fun comes from exploring the world, dressing up your avatar, hearing the curated set lists and engaging in the group chat.

Despite the bugs, Lamos thought the event might have brought the band’s music to a new audience. “I think this is a window to the future,” he said.

While Nether Meant was much smaller in scale than Open Pit’s other online festivals, it drew a much larger crowd. That’s partly because American Football brought a new audience — but also because people stuck at home are thirsting for a communal experience.

“I think there’s going to be a bigger need for them in the coming year,” said Wiesenfeld, before referencing a recent report in which bioethicist Zeke Emanuel suggested concerts will not return until fall of 2021. For Wiesenfeld, online shows include some of the same “thrill and excitement of things in a live venue experience.” And he sees nothing but potential for expanding the concept to include actual live music, more fan interaction and even better graphics.

Open Pit has a few more Minecraft festivals planned — where thousands will gather online to keep hitting the space bar to the beat, dancing alone, together.

This concert experience is suggests that there are unique and meaningful ways to engage audiences through the internet for artists. The point I want to draw the most attention to is the artists’ perceptions of the event afterward. Will Wiesenfeld points out that the attraction and “need” for events like Nether Meant are going to increase as the conditions of the pandemic persist. Wiesenfeld also acknowledges that these events have an incredible potential to blossom into a new kind of concert experience. Additionally, Peter Berkman explains that online events provide artists with a unique platform to present their art in ways never before seen.

Another point brought up by the article is the opportunity that fans have to explore a new virtual world or venue while also getting to hear special sets by their favorite artists. For the time being, everyone is getting the opportunity to experience music in ways that they would otherwise not in the real world.