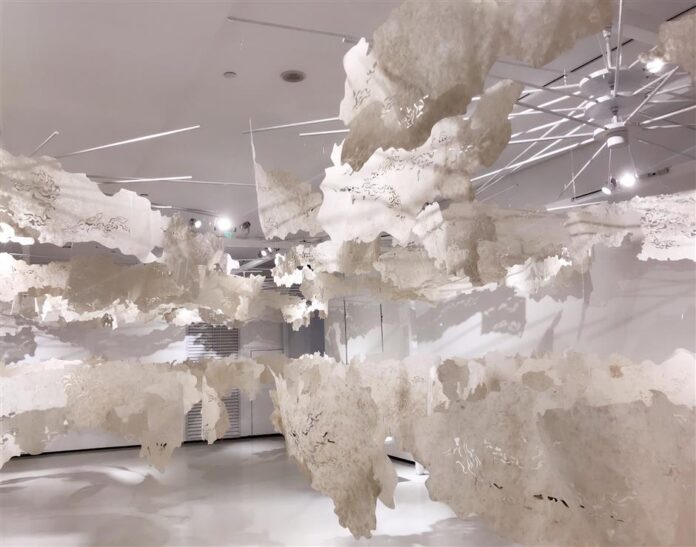 For many people, items on the list of China’s intangible cultural heritage seem to be from another age with no relevance to modern life.

However, the “Handicrafts in Yangtze River Delta” exhibition at the Duoyunxuan Art Center tries to show how some can be related to today’s urban lifestyles.

The exhibition, sponsored by the China National Arts Fund, is the latest in a series promoting traditional arts and crafts that began two years ago. Compared with previous editions which included embroidery, wood and jade carving, bamboo weaving, clay figures, cooper art and ink sticks, this year’s version is smaller in scale, but with more eye-catching works.

Entering the exhibition hall on the first floor, visitors will immediately be drawn to a gigantic installation of glittering metallic leaves. On closer inspection, you will find thin gold foil on the leaves.

It was created by Juju Wang, a young Chinese-American installation artist, known as an “interactive magician” for mixing traditional Chinese culture with modern art. She is noted for her bold use of new materials.

Another similar example is a cluster of paper-made white clouds floating from the ceiling. Wang used laser cuts for some intricate small shapes on the paper to enhance the visual effect. Rendering a poetic and elegant feel, the installation also embodies the elements of intangible cultural heritage, as the paper used was hand-made by the Dai ethnic minority group, a craft which dates back 800 years.

“Such paper is already on the brink of disappearance. But we hope they can function into our urban life with a new angle,” says Wang Yuqing, curator of the exhibition.

In a bid to change the stereotypical concept of intangible cultural heritage as being out-dated and dull, the exhibition aims to fuse them into daily life, rather than leave them as some rare techniques that can only be appreciated at museums.

“We hope that more and more intangible cultural heritage items can be self-supported through some developed new functions,” Wang says. “This exhibition is of course just a start.”

Those familiar with Dongyang bamboo weaving and Qiang embroidery might encounter something different at the exhibition.

Originating in Dongyang, Zhejiang Province, the bamboo weaving, together with Dongyang wood carving, dates back 1,200 years. People used the techniques in making lanterns in the Song Dynasty (960-1279). But the traditional craft did not chime with modern tastes. So changes have been made. The colored bamboo, complete with electric lighting, makes Dongyang bamboo weaving a chic home decoration.

Likewise, the embroidery of the Qiang minority is known for its brilliant colors and complicated needlework. A sofa wrapped in Qiang embroidery widens the use of the special folk art form and applies to daily life.

“Protecting and promoting intangible cultural heritage is a task that will take time to achieve,” Wang says. “No change in material or technique is the basic standard. We hope this exhibition will expand our thoughts on the practical use of these crafts so that they can be inherited from generation to generation in the future.”

Giving a traditional art and crafts a new interpretation or find a new application for them is a good way to keep them alive. Looking for a connection between old crafts and modern needs would be an interesting topic.