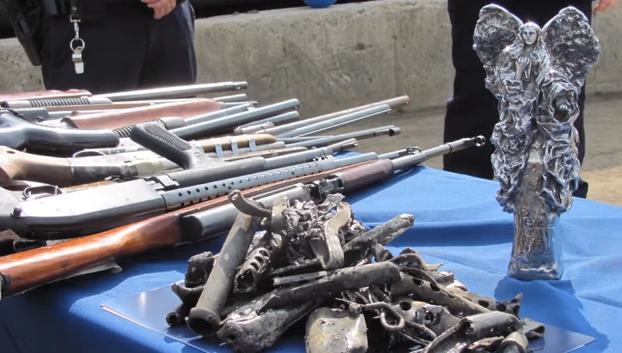 As the founder of the Peace Angel Project and the Art of Peace Charitable Trust, Lin has been making the world a better place by transforming various types of street weapons into inspiring icons of peace. During the 2017 TedxFultonStreetSalon, Lin revealed that she has more weapons than any other private individual, owning approximately 12,000 handgun, rifles, knives, cannons, and nuclear weapon casings. These are in addition to one hundred barrels of melted weapons in the form of decommissioned stainless steel.

Lin founded the Peace Angel Project in 1992 while living in San Francisco, Los Angeles. During this time, L.A. murder rates were amongst the highest in the country, and she wondered what world her eight-year-old son would inherit. She told The Christian Science Monitor: “I’d been an artist since the first time I opened my eyes, but I wanted more at that moment than to just create a piece of art.”

During a podcast with See Change Magazine, she explained: “We [The Peace Angel Project] take physical weapons and transform them into something that breathes air back into society.” For Lin, that ‘something’ is sculptures in the form of ‘peace angels’. Through their erection, Lin provides hope for a better future while also permanently taking weapons off the street. “They will never harm anyone again,” she said.

To obtain the materials for her art, Lin collaborates with local enforcement to take weapons that have been confiscated during seizures and criminal investigations. Then, working in collaboration with metal management companies, the weapons are melted down for use.

According to a press release, the planned New York Renaissance Peace Angel is named in reference to the Renaissance in art history, referring to humanity’s renaissance over weapons of destruction. A ‘labyrinth’ will be incorporated around the monument, showing a timeline of dates and occurrences related to gun violence. It will also include etched figures of loved ones and those who have passed due to gun violence, such as longtime peace activist Yoko Ono and husband John Lennon.

The California Peace Angel will feature a female angel holding three children with her left arm, while her right is held up in symbolic protection of gesture and life. The base will hold thirty-six life-sized sculptures of “Humanitarians who have done ‘Extreme Good’ during this time in human history.”

As tragic events unfold, Lin continues to collaborate with communities in need of hope. Most recently, in the wake of New Zealand’s Christchurch mosque shootings, she’s been in talks with Police Commissioner Mike Bush to collect weapons seized or voluntarily surrendered to be used as materials for a New Zealand monument.

This was such an interesting example, which showed how the right reclamation of materials can speak such immense volumes. Whether this artist is conscious of it or not, she is, of course, taking part in the circular economy, and she is doing so in a way which sends a clear message, makes people stop and think about the bigger issue at hand, and makes an impact in a way that no virgin materials ever could.