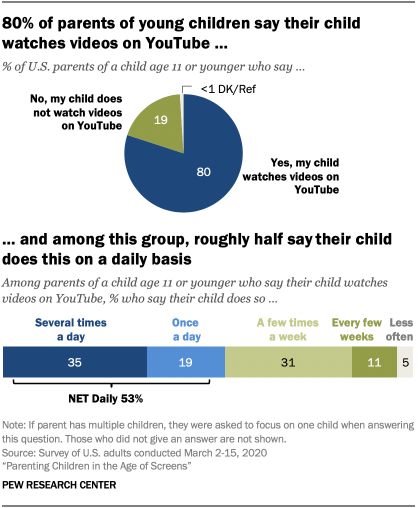 Parents with young children themselves make clear they are anxious about the effects of screen time. Fully 71% of parents of a child under the age of 12 say they are at least somewhat concerned their child might ever spend too much time in front of screens, including 31% who are very concerned about this.1 And some parents with a child in this age range already believe their child spends too much time on certain devices, including a smartphone. (It is important to note that this survey was fielded before the COVID-19 outbreak in the U.S. that closed many schools and led to widespread shutdowns and stay-at-home orders throughout the country.)

Parents overall are also apprehensive about the long-term effects of smartphones on children’s development: 71% believe the widespread use of smartphones by young children might potentially result in more harm than benefits.

These worries come at a time when it is fairly common for children of all ages to engage – in some way – with digital devices.2 For example, 80% of parents say their child age 5 to 11 ever uses or interacts with a tablet computer, while 63% say the same about smartphones. For parents of children under the age of 5 those shares are also notable: 48% and 55%, respectively. At the same time, roughly one-third of parents of a child 11 or younger (36%) say their child ever uses or interacts with a voice-activated assistant, like Apple’s Siri or Amazon Alexa. But there are wide age gaps: parents who have an older child, between the ages of 5 and 11 (46%), are more likely than parents with a child age 3 to 4 (30%) or 2 or younger (14%) to say their child uses or interacts with this type of technology.

YouTube has emerged as a key platform for both younger and older kids. Fully 89% of parents of a child age 5 to 11 say their child watches videos on YouTube, as do 81% of those who have a child age 3 to 4 and 57% of those who have child age 2 or younger. And while majorities of parents whose child uses YouTube credit the platform for entertaining and educating their children, a majority of these parents are concerned about their child being exposed to inappropriate content on the video sharing site.

But the conversation around screen time is not limited to children. Parents themselves grapple with their own device distractions. When asked if they spend too much, too little or not enough time on their phone, more than half of parents overall (56%) say they spend too much time on their smartphone, while about seven-in-ten (68%) say they are at least sometimes distracted by their phone when spending time with their children.

These findings come from a nationally representative survey of 3,640 U.S. parents who have at least one child under the age of 18, but who may also have adult children, conducted online March 2-15, 2020, using Pew Research Center’s American Trends Panel and the Ipsos KnowledgePanel. The following are among the other major findings.

YouTube is widely used by children, with parents seeing both benefits and drawbacks to the platform

Aside from interactions with the devices themselves, children also engage with a range of platforms and websites, and YouTube has emerged as a key platform for kids.

But these numbers vary significantly by race and ethnicity. Black (50%) or Hispanic parents (40%) who have a child in this age range who watches YouTube are more likely to say their child does this several times a day, compared with white parents (29%).

When it comes to their opinions about the video-sharing site, parents offer both positive and negative critiques of the platform. Fully 97% of parents whose child watches videos on YouTube say it keeps their child entertained, 88% believe it helps them learn new things, while 75% say the platform exposes their child to different cultures. Still, majorities of parents are concerned about the types of videos their child may encounter on YouTube, and some report that their child has come across unsuitable material. Some 46% say their child age 11 and younger who watches YouTube videos has encountered videos that were inappropriate for their age.3

Comment: This is another article that helps get in the minds’ of parents. Youtube is an interesting aspect of children’s technology because it is a leisurely activity that does not interact with the child. This leads to many health problems.