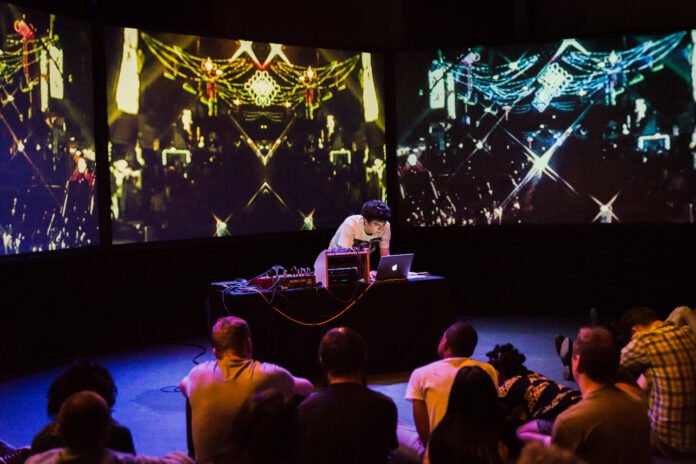 OVER THE COURSE OF THREE WEEKENDS IN JUNE 2019, the ASSEMBLY series made a spirited contribution to ongoing discussions both within The Kitchen and in the art world at large about the relationships between space and performance. Organized by Kevin Beasley and The Kitchen’s curatorial team, ASSEMBLY invited sixteen performers to occupy our building’s three floors.

In advance of these shows, each floor was emptied in order for Beasley to create video, sound, and lighting systems for the performers to utilize. In short, Beasley and The Kitchen’s team set up a series of blank spatial “canvases,” on and within which artists were invited to explore themes of access, collective thought, and cultural exchange.

. . . what follows is a selective portrait of moments from ASSEMBLY that explore two of the series’ themes in particular—how physical space and audience experience reciprocally affect one another and how the codes of art institutions inform how their visitors experience art. . .

ON THE THIRD FLOOR

Each day of performances began in our third-floor office space, which was turned into an intimate venue by hollowing out what is normally our administrative hub (opened to the public on this occasion for the first time since the 1990s). The relatively close quarters and unique orientation of the third floor—with a few confusing right-angle turns—meant that performances there became an intriguing laboratory for the relationships between audience, space, and institution.

ON THE SECOND FLOOR

After the third-floor shows, audiences moved down to our second-floor space, usually used as an exhibition gallery. On this occasion, the expansive space was empty. . . lending the gallery the feeling of a traditional “concert” setup. If ASSEMBLY as a whole may be viewed as a multi-part investigation into how performer, space, and audience experience interact, I found Angie Pittman’s June 29 solo dance performance to be a trial that yielded incredibly rich results in the second-floor space.

Audiences come to performances held in venues like The Kitchen with a certain expectation: they’ve committed themselves to viewing the show, and they are willing to re-position themselves around performers to guarantee their sight lines, even if those performers intentionally make doing so difficult.

ON THE FIRST FLOOR

Following the second-floor shows each day, audiences then moved down to our first-floor theater space—an empty black box theater with only an installation by Beasley hanging in its center—for the final set.

Assembly is an exhibit that spins the familiar aspects of live performance and makes for a literal and cognitive layered experience. While the performance itself is unique, perhaps the more interesting aspect is the journey that the viewers take through the Kitchen. I imagine it would be exciting traveling to the top floor upon arriving and build anticipation as you pass the future spaces on the way up. Now you not only get to enjoy the performance on your floor, but you get to imagine what the next floor is going to be like. Perhaps it would feel like 3 concerts in one night, as your brain creates memories from the performances in the different spaces.

This exhibition provides an example of a unique concert-going experience and paints a picture of how spaces can immerse the viewer in new, unexpected ways. With the open-ended hiatus of live performances today, the success of Assembly serves as a potential stepping stone into discovering ways of overhauling these experiences for something new and exciting.