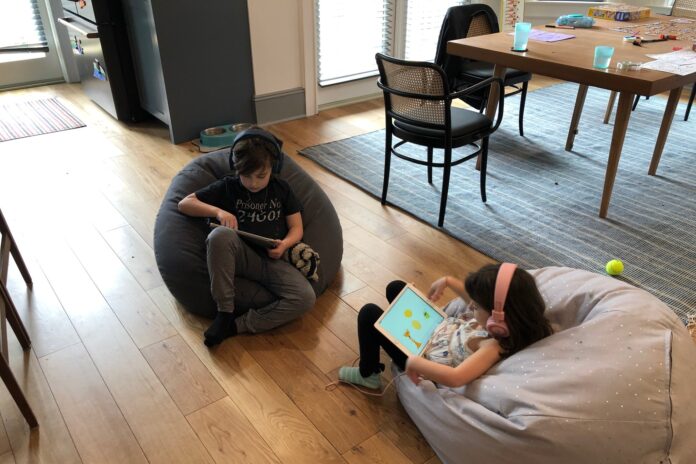 This article touches on the parent’s point of view and the pressure that is being put on them to (somehow) both work to provide for their family and serve as teachers for their kids. It dives into various different experiences parents are having at home with their kids, and different ways the situation is being approached (It does not, however, touch as much on families in which parents aren’t able to be home). One of the most interesting insights from this article was the seemingly little amount of work parents could get their children to do at home compared to how much they typically did at school during a day, and the difficulty of the parent to get their kids to treat them and listen to them like they do their teachers at school.

Harris, Elizabeth A. “‘It Was Just Too Much’: How Remote Learning Is Breaking Parents.” The New York Times, 12 June 2020, https://www.nytimes.com/2020/04/27/nyregion/coronavirus-homeschooling-parents.html.

“Parental engagement has long been seen as critical to student achievement, as much as class size, curriculum and teacher quality. That has never been more true than now, and all across the country, moms and dads pressed into emergency service are finding it one of the most exasperating parts of the pandemic.

“With teachers relegated to computer screens, parents have to play teacher’s aide, hall monitor, counselor and cafeteria worker — all while trying to do their own jobs under extraordinary circumstances. Essential workers are in perhaps the toughest spot, especially if they are away from home during school hours, leaving just one parent, or no one at all, at home when students need them most.

“Yarlin Matos of the Bronx, whose husband still goes to work as a manager at a McDonald’s, has seven children, ages 3 to 13, to keep on track. She spent part of her stimulus check on five Amazon Fire tablets because the devices promised by the city’s Education Department had not arrived.

“Ms. Matos, a psychology major at Bronx Community College, said she must stay up late, sometimes until 3 a.m., trying to get her own work done.

“’I had a breaking moment where I had to lock myself in the bathroom and cry,’ she said. ‘It was just too much.’

“There is widespread concern that even with remote learning in place, many students will return to school behind where they would have been if they’d been in the classroom. (President Trump said on Monday that governors should consider reopening schools before the end of the school year.) Teachers had little time to prepare for remote learning, and many children had inadequate or no computer access.

“For students without close parental guidance, the outcome could turn out even worse.

“Ronda McIntyre, a fifth-grade teacher in Columbus, Ohio, said that of her 25 students, only six were participating consistently, generally the ones whose parents were already in regular communication with their teacher.

“Other families have reached out to Ms. McIntyre to say that they are too overwhelmed with their own work to help with the lessons at home. And some have told her they are trying, but that their children won’t cooperate.

“Even parents who describe running tight ships at home say they are anxious about what months away from classrooms will mean for their children. They are also finding it hard to accept that 25-minute Zoom classes or lessons sent by email is what school has been reduced to.

“Education experts advise that making a schedule can help children treat the current setup more like school, as can being clear about when it’s work time and when it’s play time. . . Creating a dedicated space for them to work can also be helpful.

“And parents should take it easy on themselves on days when things don’t go as planned.

“As stressful as it can be, of course, it’s not a crisis for everyone. Behold Helen Williams-Morris, a mother of three children and a cafeteria worker at a school in Memphis. . . She said that all of her children are fairly self sufficient.

“A former teacher, Ms. Pinckney-Lewis lays out the schedule for her son, Gavin, a first-grader with special needs, every morning on colored pieces of construction paper. Red is English, orange is math, blue are his breaks. She previews his video lessons to make sure they aren’t too long and makes notes about when to end them herself if necessary.

“And yet despite her background in education, she said, ‘I have complete and total anxiety.'”