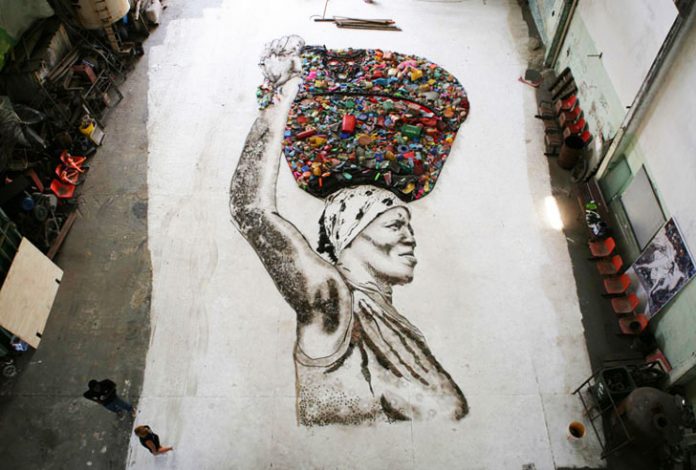 Since the mid-1990s, Brazilian-born artist Vik Muniz has established a reputation not only for his critically acclaimed appropriations of iconic figures like Jackson Pollack in chocolate syrup or the Mona Lisa in peanut butter and jelly but for his early work, a subtly deceptive series of portraits featuring smiling children made from sugar. The “Sugar Children” are child laborers whom the artist befriended in the Caribbean, and in this work, he contemplates their future as workers in the cane fields. The portraits launched his career and were shown as part of the Museum of Modern Art’s esteemed New Photography series.

This kind of social consciousness is also the subject of Muniz’s most recent work, which is chronicled in the Oscar-nominated film Waste Land by director Lucy Walker.

The film begins with Muniz returning to his family home in Brazil, where he describes his humble beginnings and journeys to the Jardim Gramacho, the world’s largest garbage dump on the outskirts of Rio de Janeiro. The film’s incredible cinematography captures the endless toil of the catadores, a small band of garbage collectors who separate recyclable materials. These low-paid collectors are found working in dangerous conditions, overwhelmed in oceans of trash.

“These people are at the other end of consumer culture,” says Muniz. “I was expecting to see people who were beaten and broken. But they are survivors.” The humanity of these marginalized people is captured in heartbreaking interviews with the workers and in small details: in one scene, meals are cooked in the dump from reclaimed food.

Muniz initially planned to paint their portraits with the garbage, but instead he worked with them to create enormous photographs of each person from materials in the dump. In the film, the careful collaboration results in a crash course in contemporary art and therapy. Muniz has to persuade his subjects to participate, shoot portraits of them in an impromptu studio in the dump, get the collectors to pick garbage to sculpt with for their portraits, and then document the final collage.

Within this time, Muniz transforms the workers into diligent art assistants. They go though a deep process of learning about his work while creating monumental sculptures of their likenesses. In turn, they begin to see themselves differently.

Toward the end of the film, Muniz goes to London to auction the work at Phillips de Pury, selling one portrait for more than $64,000. He returns 100% of the proceeds to the subjects so they can improve their labor union to educate and protect the workers of Jardim Gramacho.

Waste Land documents a self-reflective artistic process that leaves no one untouched, and in the end, the final portraits stand as testimony that art can indeed change lives in small and great ways.

The gritty, intimate relationship which the catadores have to waste in in this piece, is far outside the realm of anything most of us at this University have ever experienced. For us, waste is a thing which goes “away” (with seldom a thought to where “away” actually is). The way that Muniz works with the catadores’ reality of living in waste, and harnesses it, re-shapes it into such a personal and human thing ⁠— there’s a lot of power and inspiration to be drawn from that. 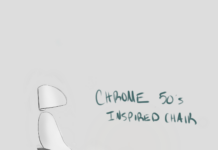