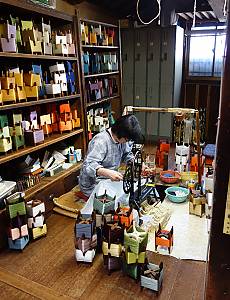 The Covid-19 pandemic has had a significant negative impact on Japanese traditional stage performances, including the professionals who make the stage tools necessary for these performances. Indeed, these traditional important performances, such as Noh, Kyogen, Kabuki and Bunraku became increasingly canceled or postponed since late February 2020, with most of them stopped by the beginning of May 2020.

Most of theatres were closed, and as a consequence, traditional music players and performers have not had any income. Corresponding to this, those who make various stage tools and performers’ costumes have no more work, and they are also in the same economic difficulties.

For instance, the professional who make Noh costumes have a very special technique among Japanese textile domains. These costumes are one of the essential items for such a stage performance, and the performers carefully select the costumes.

Here is an example from the “Sasaki Noh Costume”, a company in Kyoto that makes one of the best Noh costumes. The order to this company for the costumes has decreased since March 2020, with almost no new orders coming since April 2020. They have had to reduce their products, not being able to work more than two days per week. While there have been difficulties for the business in the past, due to the COVID-19 pandemic, it has become almost impossible to maintain their business.

This will have huge impact for the continuation of such a tradition. It is indispensable for costume-making of Noh to have special detailed knowledge and technique, while directly listening to performers about the colours, patterns and designs. These cannot be transferred to new generations in an indirect way, such as only via information on text nor movies. Thus, if those costume-makers lose their traditional job, our traditional performances will face a fatal loss. In addition, there is no association where these stage-tool makers can unite, so that they cannot organize a voice for our societies / government about such a critical and urgent situation.

Under such conditions, there is almost no move in Japan using our living heritage, such as Noh to cope with the current situation.